SAVE THE EARTH
Lor Breyley

For this month’s environmental focus on plastics, I have shamelessly copied parts of an article in Science News for Students (don’t panic, see permission to publish at end of article). Go to New recycling technologies could keep more plastic out of landfills | Science News for Students for way more information. Those new technologies are a ways off. For the sake of the earth: forget recycle, commit to radical reduction of plastic use. See previous newsletters for ideas on eliminating plastic use.

New recycling technologies could keep more plastic out of landfills by Maria Temming:

It feels good to recycle. When you sort soda bottles and plastic bags from the rest of your garbage, it seems like you’re helping the planet. The more plastic you put in the blue bin, the more you’re keeping out of landfills, right?
Wrong. No matter how much plastic you try to recycle, most ends up in the trash heap.

Take flexible food packages. Those films contain several layers, each made of a different type of plastic. Because each type must be recycled separately, those films are not recyclable. Even some items made from only one kind of plastic are not recyclable. Yogurt cups, for instance, contain a plastic called polypropylene (Pah- lee-PROH-puh-leen). When this gets recycled, it turns into a gross, dark, smelly material. So most recycling plants don’t bother with it.

Only two kinds of plastic are commonly recycled in the United States. One is the type used in soda bottles. That’s called PET, short for polyethylene terephthalate (Pah-lee-ETH-uh-leen TAIR-eh-THAAL-ayt). The other is the plastic in milk jugs and detergent containers. That’s high-density poly- ethylene, or HDPE. Together, those plastics make up only a small fraction of plastic trash. In 2018 alone, the United States landfilled 27 million tons of plastic according to the U.S. Environmental Protection Agency. A mere 3 million tons was recycled.

Low recycling rates aren’t just a problem in the United States. Only 9 percent of all the world’s plastic trash has ever been recycled. Twelve percent was burned. Seventy-nine percent has piled up on land or in waterways. Researchers reported those estimates in 2017 in Science Advances. 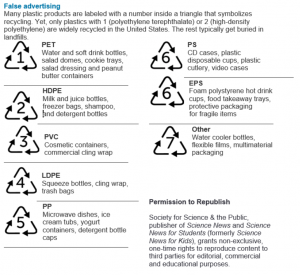 David Farrier reflects on the immense burden of materials that mark our place on Earth.

We’re Gonna Carry That Weight a Long Time – David Farrier (emergencemagazine.org)
I read how a team of scientists, writing in Nature, had estimated that 2020 was the year the mass of human-made materials exceeded that of all living things on the planet: the combined mass of our concrete, asphalt, aggregate, metal, glass, and plastic superseded the one Teratone (one trillion metric tons) of plants, mammals, fish, bacteria, fungi, archaea, protists, and viruses. By mass, there are now more buildings and infrastructure (1,100 Gt) than there are trees and shrubs (900 Gt); more plastic (8 Gt) than land and marine animals (4 Gt).

Human-made objects outweigh living things. It seemed impossible to account for, a fact too heavy to lift into comprehension.

WHAT CAN I DO FOR SAVING THE EARTH?

Carbon footprints can be reduced through improving energy efficiency and changing lifestyles and purchasing habits. Reduce, Reuse & Recycle preferably in that order.

Continuing our thoughts around the importance of trees for air quality, what are some ways we can responsibly use paper products? We cut down 23,000 (conservative estimate) trees a day just for toilet paper. Have you ever noticed a package that says in large print, “Made from 100% recycled materials,” and then in small print it says, “at least 50% from post-consumer products?” What is going on here? If it’s “recycled” doesn’t that mean it was already used at least once? Turns out manufacturers purchase new products and then “recycle” them to claim they are using 100% recycled materials. Watch the labels.

How to Reduce Paper Usage

March, 2021 – IS YOUR HOUSEHOLD TREATING WATER WITH RESPECT AND CARE?

Around the world, many are realizing that we are not only experiencing a climate emergency, but a water crisis too. Many people around the world do not have access to clean water or must walk miles every day to gather water. Some causes of water shortage include climate change, pollution, and industrial consumption. Water is life, and those who wish to control life will seek to monopolize and abuse water. People are boldly standing up to defend our precious water from the overuse of corporations and governments worldwide.

Are you consuming a fair share of water? Individual conservation efforts will not solve the water crises that fuel conflict. But used with intention, they will remind us that we are members of a global family, that many struggle to access clean water, and that our quest for “just water” is deeply interconnected. Your influence will spread to others and make a difference.

Here are some ways to experiment with reducing your water consumption:

“Healing the wounds of the earth and its people does not require saintliness or a political party, only gumption and persistence. It is not a liberal or a conservative activity; it is a sacred act. It is a massive enterprise undertaken by ordinary citizens everywhere, not by self-appointed governments or oligarchies.”
–Paul Hawken

If you’re like me you’ve heard the term carbon footprint and sort of know it’s a good idea for the environment to reduce your footprint. But what is it, why does it matter, and what can I do?

What is Carbon footprint?

Simply the amount of carbon dioxide (CO2) emissions associated with all the activities of a person or other entity (e.g., building, corporation, country, etc.). It includes direct emissions, such as those that result from fossil-fuel combustion in manufacturing, heating, and transportation, as well as emissions required to produce the electricity associated with goods and services consumed.

Why does it matter if there is too much CO2 in the air we breathe?

Carbon dioxide traps radiation at ground level, creating ground-level ozone. This atmospheric layer prevents the earth from cooling at night. One result is a warming of ocean waters.

Right now, CO2 levels are still climbing rapidly. There’s good reason to think this will have catastrophic effects on human health by transforming the planet. These CO2 levels will dramatically increase pollution and related diseases, potentially slow human cognition, cause extreme weather events, and broaden the ranges of disease-carrying creatures like mosquitoes and ticks.

Diseases like Lyme disease, Zika, Dengue, and West Nile that are spread by ticks, mosquitoes, and fleas tripled in the US between 2004 and 2016, according to a new report by the Centers for Disease Control and Prevention. Carbon dioxide pollution effects on health – Business Insider

Why is my carbon footprint given in number of trees needed to compensate for my carbon emissions (almost 300 for me today)?

Every living thing on Earth is made up of four basic elements: carbon, hydrogen, oxygen and nitrogen. Those four elements make up about 96% of your body, and most of a tree’s roots, trunk, branches, and leaves.

While we humans get most of our carbon from food, trees breathe it in (just like we breathe in oxygen). But when a tree breathes, it inhales carbon dioxide and exhales oxygen — the exact opposite of humans. And as a tree matures, it can consume 48 lbs. of carbon dioxide per year (among other greenhouse gases like ozone), and release enough oxygen for you to breathe for 2 years! How Planting Trees Can Reduce Your Carbon Footprint | One Tree Planted

Our committee met via Zoom on December 10. While there were only 6 of us, we made good progress. Lor Breyley is collecting and compiling a list of “earth friendly” actions taken by our members. This list will be published in the February “Voice.”

While we are concerned about the pandemic and all the related illnesses and deaths, many people are unaware of the sickness, and even death caused yearly by pollutants in our water, air, and soil. The numbers harmed by pollution every year are huge. The committee agreed to work on creating an educational program that will bring awareness of environmental issues to our Medina County community. We will be partnering with the library and hope to also involve Leadership Medina and others. Before our next meeting, members will be researching different aspects and contacting people who might be possible panel participants. Because we won’t be having our Book Sale in April, the month of Earth Day, the goal for this program to happen is in April.

Our next meeting will be at 1:30PM on Thursday, January 14. Please consider joining us. This is a congenial group who are working on a very important issue that affects all of us. As Eleanor Roosevelt stated, “Today is Tomorrow.” What we do today can make a real difference in lives tomorrow.

We have been learning about Reduce, Reuse and Recycle for years. Now we are hearing that our efforts to save our planet may not be helpful. Why is this? Should we believe this? What should we be doing?

At our first meeting, we talked about where to start. The general feeling was that we should be doing something to educate our community. Julianne Bedel, an AAUW member and the director of our Medina County District Library, has offered the use of the library and of the library tech staff to help us.

Jane Fonda’s new book, What Can I Do, which is also our October book group selection, offers ideas and facts that can help us. We need your ideas, too. Be a part in helping us create a positive path to a better environment for Medina County.

Being Green – Proper Disposal of PPE

Around the world, face masks and gloves are among items of litter that are now commonplace. Not only is this littering, but it has the potential to expose others to coronavirus.

As Green Matters reported last month, there are better ways to get rid of these protective items. “As far as gloves go, probably the best thing you can do is be wise about your consumption; while these are a necessity for the healthcare workers, if you’re properly social distancing and staying at home, you won’t need to send any gloves to the landfill, where nitrile gloves will likely take centuries to biodegrade and natural latex can take years to decompose.”

“As far as masks go, things are a bit more complicated; in order to avoid the public health risk associated with the masks, they have to be thrown out and sent to the landfill in order to be discarded properly. If you’re using a mask because you are sick or you’re caring for someone sick, it should be removed from behind, wrapped in a tissue, and thrown out in a closed garbage pail in order to prevent the spread of the virus, according to the WHO. You should then immediately wash your hands with soap and water for at least 20 seconds.”

Home made fabric masks should be laundered after each use with soap and warm water.