We hope each of our members will find something of interest this year and will join with others in our organization in an excursion that will offer the opportunity for fellowship, enrichment, enjoyment, and education.

Please peruse excursions as listed, add the dates to your calendar, and make a note of the deadlines and details.  From time to time, last-minute events like movie screenings are posted. We hope to see YOU on a future A&E outing.  Guests and potential members are always welcome. Feel free to contact me at any time with questions or suggestions for future events.

As many events may have been cancelled or postponed due to restrictions imposed by the current health advisories, we will post activities next month. Check your e-mail, our branch website and our Facebook page.

Wednesday, March 18, 2020 • 3:30 PM
Host Contact Info: info@rallyforpublicschools.org
On Wednesday, March 18, public school parents, students, teachers, education support professionals, school administrators, business officials and community members from across Ohio will hold a “virtual rally” to kick off two weeks of action in support of the students in our public schools. Use this link if you are interested in registering for the on-line rally.

Nine members had the opportunity to not only see a beautiful exhibit of lamps and
accessories from the Cleveland Museum of Art’s Tiffany collection – but also learn more about the chief designer from Tiffany Glass Studio’s Women’s Glass Cutting Department, Clara Wolcott Driscoll. 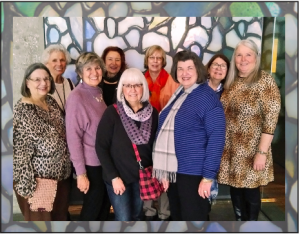 Driscoll was from Talmadge, OH, and attended the Western Reserve School of Design for Women (Cleveland Institute of Art) when it was newly opened. Her experience and technical skills led her to create many of the famous lamp designs that brought nature and art into the home; the much acclaimed “Wisteria”, “Poppy” and “Dragonfly” lamps have been attributed to her. At a time when men dominated art and indus- try, she made a mark as a “new woman” in the work force. Women shed their corsets, went on indepen- dent outings on bicycles, entered colleges and univer-sities and marched for suffrage. Driscoll was part of this movement at the turn of the 20th Century.

With curators from the museum and faculty from the CIA, the lecture we attended was further enhanced by comments from a cousin of Driscoll who has been researching family letters and papers to shed light on the artist’s life. The letters are now archived at Kent State University.

“Tiffany in Bloom” continues in the CMA’s first floor Focus Callery through June 14.

Members and guests attended the Montrose movie showing of The Current War and came away with insight into the “battle” which decided the form of current — AC or DC — that would prevail as the dominant supplier of electricity for this country during the last part of the 19th Century. While three talented actors played the roles of inventors Thomas Edison, George Westinghouse and Nikola Tesla, their interaction seemed forced and superficial. The overall impact was not very dramatic. Read the book The Last Days of Night, by Graham Moore– which gave impetus to the making of the movie– for a fascinating and well-put together story. Prior to the screening, a number of us had lunch at The Mustard Seed.

Look for movie screenings to be posted.

Money is due by Tuesday, November 5, 2019.  Send your money to Mary Lou Euse at 4155 Shurell Pkwy, Medina, Ohio 44256. If you make a reservation, you will be required to pay for a ticket. Carpooling available leaving Medina at  6:15 p.m. This is a great opportunity to see this outstanding musical! 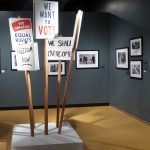 On Wed., March 8: members toured the special exhibit, “This Light of Ours: Activist Photographers of the Civil Rights Movement,” at the Maltz Museum of Jewish Heritage in Beachwood. Highly recommended, poignant and insightful, the exhibit will remain open through May 14.

Sat., February 18, was theater night for AAUW members and guests at the Medina County Show Biz Company performance of the musical “Guys and Dolls.”

On Tues., January 31 members visited the Medina County Historical Society’s John Smart House to see some of the antiques and vintage items that played a part in the history of Medina County. The docent-led  private tour highlighted ten of the museum’s most interesting pieces – from a spectacular arrowhead collection to a Revolutionary War discharge paper signed by George Washington. Thanks to Joellyn Leget for organizing! 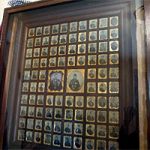